Ozuna is a global phenomenon. He’s a trending artist that has seemingly come out of nowhere. Ozuna has talent and many hit singles but he also has a strong marketing team working behind him. Part of his success is largely due to implementing new marketing strategies his competitors aren’t.

For Ozuna’s most recent album release “Odisea” his team implemented national sponsored Snapchat geofilters over Puerto Rico and Peru. Snapchat geofilters are popular for a young demographic and the results are telling. Ozuna’s Odisea the Album was the top latin album in the world and the top album in Puerto Rico and Peru for months. Ozuna’s album is currently in the top 5 months after its release. His total reach was more that 6 million just on Snapchat not including shared posts on other platforms. The combination of his talent and his marketing team have elevated him to superstardom.

Find out how we can help you run a national campaign and reach millions. 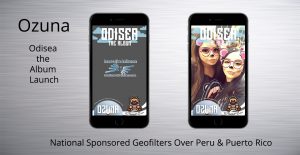